At Wootton Park School, there are many opportunities for learners to receive advice and guidance about their aspirations and future career.

We are delighted to welcome an experienced careers adviser to our school every week to offer professional and tailored advice.

“Shoot for the moon and if you miss, you will still end up in the stars”

On Monday 4th March, Wootton Park School held its inaugural annual Careers Fair showcasing a range of local employers, giving learners the opportunity to speak with people from a range of different professions.

The Careers Fair marked the first day of National Careers Week and is a celebration of careers guidance and free resources in education across the UK. Learners in year 8 and 9 have had the opportunity to sign up to Q&A sessions with representatives from a wide range of professions every lunchtime during National Careers Week.

The assembly included a Q&A session led by learners covering areas such as the effect of Brexit on careers, voting age and the importance of building resilience. Mr Ellis told the learners, “You may fall at the first hurdle, but the key skill is to get back up again and keep going.”

Simon Hill, representing Churches, a Northampton based shoe company, explained that such events are extremely important to give children ideas about their future careers. Fahris in year 9 agreed: “This has been an awesome event. I have found it informative and I have learnt a lot.”

Mr Southworth presented to year 9 followed by a Q&A session about his long and varied career. The learners were inspired by his visit. Mr Southworth told the learners “the only way to predict your future is to create it yourself”.

Career aspirations were also introduced in EYFS where they enjoyed a ‘When I Grow Up Day’ in February.

We were delighted to welcome four parents to share their job with the learners. Parental support is extremely valued at our school and we appreciate when parents give up their time to share their knowledge and expertise with our school community. Thank you to Ms Cross, Ms Kemp, Ms Goscomb and Mr Gallimore.

Wootton Park School welcomed a visit from Andrea Leadsom MP, Conservative Member of Parliament for South Northamptonshire, Lord President of the Council and Leader of the House of Commons.

During the visit, Andrea toured the school's bespoke modular building and held a Q&A session with both primary and secondary learners.

Andrea told year 8 learners " if any of you do have a desire to affect the world around you, you should look into politics"

Andrea talked about a range of careers related topics emphasising the value of apprenticeships as well as university education.

When asked about inequality, Andrea advised that "most men in politics are pro equality" and although there are now 209 female MPs, it is still too few.

Head Girl, Sarinah, asked if Theresa May's announcement that she would set a departure date signals Andrea's next career move. Andrea responded saying that she had previously said that she was standing for leadership. "I have told the Prime Minister" and "it is an opportunity for another career move'

Learners in Wootton Park School's primary phase spoke to Andrea about their careers aspirations and the jobs that their families have ending with a presentation of a birthday card and a piece of cake to mark Andrea's recent birthday.

Andrea told the children that she visits lots of schools around the country but that Wootton Park School 'is one of the best schools' she has ever visited adding "I think you have an excellent headteacher". 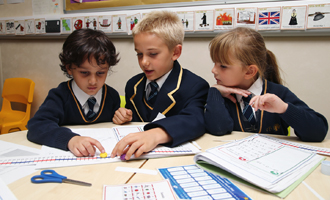